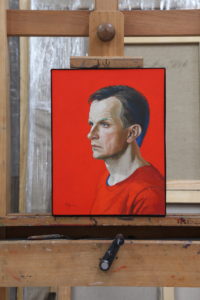 He was born 1970 in Vilnius, Lithuania. In the years 1992-97 he studied at the Academy of Fine Arts in Warsaw, from which he graduated with a diploma. In 2014 he got a PhD on fine arts from his Alma Mater. In 2000 he started a studio of drawing and painting where he has classes with children, young people and adults on drawing, painting, basics of composition and perspective. Each year, the studio organizes workshops for young people and open air painting events. Students who finished a course in Bluj’s school continue their studies at many higher education institutions in Lithuania and other countries of the European Union. Since 2002 he has been member of the Lithuanian Painters’ Association. In 2005 by the decision of the Lithuanian Minister of Culture (No. 2V-520) he was granted the status of creator of art. In 2008 he was a curator of an exhibition of works by painters of Polish origin, members of the Lithuanian Artists’ Association. This exhibition was organized as part of the World Congress of Wilniuki. In 2011 Bluj was member of the jury of the competition for a “Czesław Miłosz Poster” organized by the Polish Institute in Vilnius on the occasion the Miłosz Year. In 2009 he was awarded a Medal of the Union of Lithuanian Poles for his efforts in propagating Polish values  in Lithuania and a Medal and an Honorary Diploma on the I International Exhibition of Painting and Graphic Art “Colours of Poland in Rome”, which took place in Cascina Farsetti. In 2013, President of the Republic of Poland Bronisław Komorowski awarded Bluj the Knight Cross of the Order of Merit of the Republic of Poland for his outstanding contribution to the promotion of Polish culture and his achievement in artistic work.